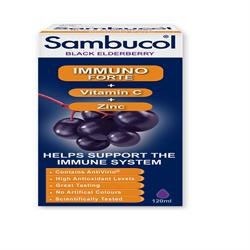 The Romans’ natural immune-booster
New evolving forms of the flu virus can sometimes be problematic as
especially virulent strains develop periodically.
In the 1920s one flu strain killed more
than 100,000,000 people worldwide -that’s more than
died in both World Wars.
Elderberry is a famous flu remedy from traditional medicine, its recorded
medical uses going back at least to the time of the Romans.
Now research from Israel and Panama shows that an elderberry preparation not only
ended cases of the flu within three days, but also increased antibody production.The research demonstrated that
elderberry (Sambucus nigra) not only
stimulates the immune system, but also
directly inhibits the influenza virus.
Israeli researcher Madeleine
Mumcuoglu PhD of the Hadassah-
Hebrew University Medical Center in Ein
Karem, Israel, performed the initial
research, and found that elder seems to
be designed as a specific weapon against
the flu virus.
The influenza virus forms tiny spikes,
called hemagglutinins, which are laced
with an enzymes called neuraminidase.
The enzyme helps the virus to penetrate
the cell walls of a healthy organism. The
virus then inhabits the cell, reproducing
more viruses.
The active ingredients that the researchers discovered disarm the
neuraminidase enzyme within 24-48 hours, halting the spread of the virusIn clinical trials,
patients who tookthe elderberry reported speedy
conclusion of symptoms.
Twenty percent reported significant improvement within
24 hours, 70% by 48hours, and 90%claimed a complete
cure after three days Bycontrast,patients
receiving the placebo required six days for
recovery.
As evidence that elder has more activity
than simply the enzyme-neutralizing
constituents, researchers found that the
patients who took it also had higher levels
of antibodies against the flu virus.
Elderberry has been proven effective
against eight different influenza viruses.
This may help solve the perennial problem
of the ‘mutating flu’.
It is well-known that viruses have the
ability to alter their genetics and create
new strains. This makes a problem for
creating vaccines against viral diseases,
such as flu, because the vaccine can only
be developed against known strains. The
host remains unprotected against newly
evolved forms of the virus.