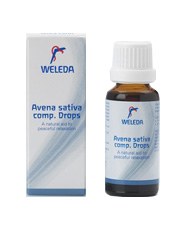 Avena Sativa Comp Drops
Helps relaxation and restful sleep after a stressful day. Can also be used as a daytime remedy for relief of temporary nervous tension, irritability, restlessness and edginess. Suitable for vegans
AVENA SATIVA The fresh, above ground parts of Avena sativa, Oats, when in flower are widely used in herbal medicine. Oat's traditional use as a general nutritive and nerve restorative is well documented. The Homeopathic potency of Coffee used in Avena sativa comp is a typical example of the idea of “like curing like”. COFFEA TOSTA The effects of coffee in material amounts represent the homoeopathic “provings” of the substance, effects such as increased intellectual receptivity, rapid combination of ideas and alteration of sleep patterns. Therefore coffee is used Homoeopathically to treat sleeplessness due to nervous irritation, particularly where the mind is constantly reviewing past events and future plans. HUMULUS LUPULUS The dried female flowers or cones of Hops. Introduced into Britain in the 16th Century, they were used in medicine as an aid to sleep and to calm nervous stomachs. Hop filled pillows are a traditional method in folk medicine for the treatment of sleep disorders. PASSIFLORA INCARNATA (Passion flower) so named because the corona in the centre of the flower resembles Christ's crown of thorns. The sedative properties of were first reported in the 1860's and it's use in insomnia was well established in the later part of the 19th Century. VALERIANA OFFICINALIS has a long history of use for its calming properties in the treatment of various nervous disorders including states of hysteria, excitability and mild insomnia. During the World Wars Valerian was used to treat both shell-shock and “bombing neurosis”. Cats are driven into euphoric frenzy by the smell of valerian root, while the human response is one of sedation and relaxation.